On January 31st and February 14 we conducted an oral history interview with Charles Collins at the Film Farm.

Charlie is a Master Mason and Past Master of Middleville Lodge #231.  Charlie is a member of many Masonic organizations and has a life time of dedication to the craft.

Here is Charlie with his wife and partner Carol. Carol is a member of the Order of the Eastern Star and works tirelessly with Charlie on many Masonic activities.

Charlie and Carol have been running charity Texas Hold-Em Tournaments for the last several years.  The combined efforts have contributed to numerous Masonic Organizations.

The hall at the Middleville Lodge was dedicated to Charlie for his work in helping paying off the mortgage for the Lodge.

Glenn Tussey, Master of Middleville Lodge presided over the ceremonies the evening of May 2nd 2010.  Many members of the Lodge were present in the celebration and dedication of the Charles E. Collins Sr. Masonic Hall. 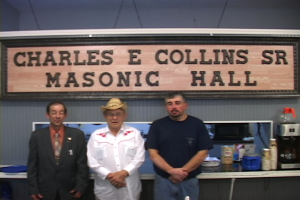 Thank you to Charlie & Carol of all that you do.

This video was made as part of his memorial service which was held Saturday Sept. 8, 2012 in the First Presbyterian Church in Hastings, Michigan.  The Middleville Masons Lodge #231 sponsored a dinner at the Lodge following the memorial service.