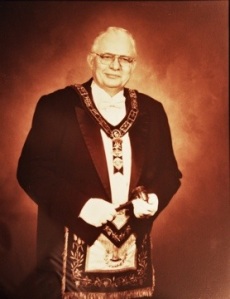 Donald J. Van Kirk was born on January 6, 1935. When he was seven years old, his family moved to Dearborn. He graduated from Dearborn High School and received a two year associated degree from Henry Ford Community College. He served in the U.S. Navy and continued his education as the 1st Class Recruit Education Petty Officer at Great Lakes, Illinois and graduated at the top of his class at the Electronics School. He completed several courses through the U.S. Armed Forces Institute and passed the Federal Communications Commission Examination for a first class Radio-Television Operators license. He attained the rank of 2nd Class Petty Officer before his honorable discharge from the Navy after four years of service. He married Wyva Moore on April 28, 1956. They were blessed with one daughter.

He has been a member of the Society of Automotive Engineers for more than twenty years and has served on their Biomechanics Subcommittee.

He was raised as a Master Mason on May 16, 1977 in Dearborn Lodge No. 172. He is a member of Phoenicia Waverly Lodge No. 527 and served as its Worshipful Master in 1990. He holds membership in Dearborn Chapter No. 172, R.A.M.; Northville Council No. 30, R. & S.M.; Detroit Commandery No. 1, K.T.; Detroit York Rite College No. 1, where he served as Governor in 1991. He holds Purple Cross and Charity Jewel Awards. He is a member of the Scottish Rite, Valley of Detroit, where he served as Thrice Potent Master as well as Commander-in-Chief. He was Coroneted with the Thirty-third Degree in 1988. He served as Recording Secretary of the Cycle Patrol Unit of Moslem Temple Shrine for ten years. He is also a charter member of Britannia Lodge No. 601 and the Michigan Lodge of Research and Information No. 1, where he was a founding member and second Worshipful Master. He is a member of Dearborn Chapter No. 421, O.E.S.; Al Matta Grotto; Thistle and Rose Council No. 27 of the Allied Masonic Degrees and served as Celebrant of the Michigan College of the Sociatas Rosicruciana in Civitas Foeteratis. He is also a member of the Iowa, Missouri and Southern California Masonic Research Lodges as well as the Correspondence Circle of Quatour Coronati Lodge No. 2070 in London, England. He holds life memberships in the Philalethes Society, Royal Order of Scotland and has had ten Masonic research papers published, earning him the honor of being listed in “Who’s Who in Freemasonry.”

He was duly elected and installed as the Most Worshipful Grand Master of Masons in Michigan on May 30, 1996.

During his term of office he dedicated the John C. and Velma Doig Chapel and Education Center at the Michigan Masonic Home in August 1996. He also dedicated the new public library in Lowell, Michigan.